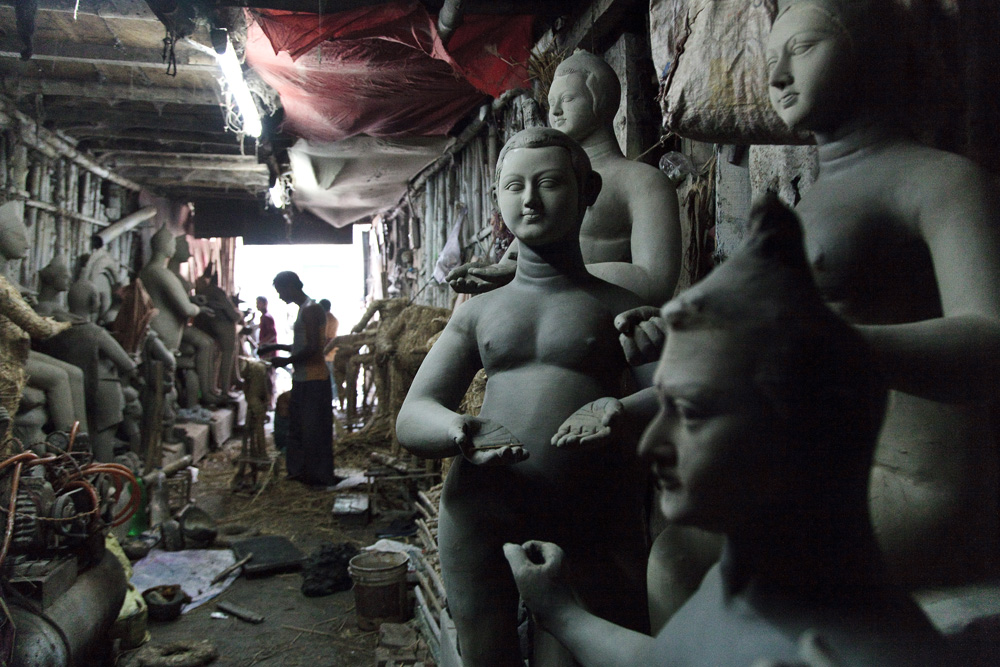 Inside the workshops of Calcutta’s idol makers. The area of Kumartuli in the North of the city is home to the many Kumar (sculptors) who create the idols that are offered to the Ganges during religious festivals. More images after the jump…

The figures are made by hand from a wooden frame and straw with a final layer of clay. Once dried these effigies depicting the gods are lavishly painted and decorated before being sold as offerings to the river.

As I was getting near to the end of the trip by this point I felt that documenting the production of these would act as a nice way of showing the direct relationship between the people of Calcutta and the river.
My initial plans had been to end the trip at Sagar Island which lies around 40km from Calcutta. This is regarded by Hindus as the official end of the river but due to timings and finances Calcutta would be where my personal trip would end. In fact I’d been told that if there was no festival taking place Sagar island would be pretty much deserted apart from the thriving number of snakes which inhabit the island so I felt I’d made a wise decision.

As this was also my final week of the trip I was conscious that I also wanted to try and capture images which not only showed Calcutta but also acted as closing images for the whole voyage. Gazing at the wide and sedate Ganges from the banks here in Calcutta it was hard to believe that just two months ago I had witnessed it as a slender, fast flowing tributary in the freezing foothills of the Himalayas. 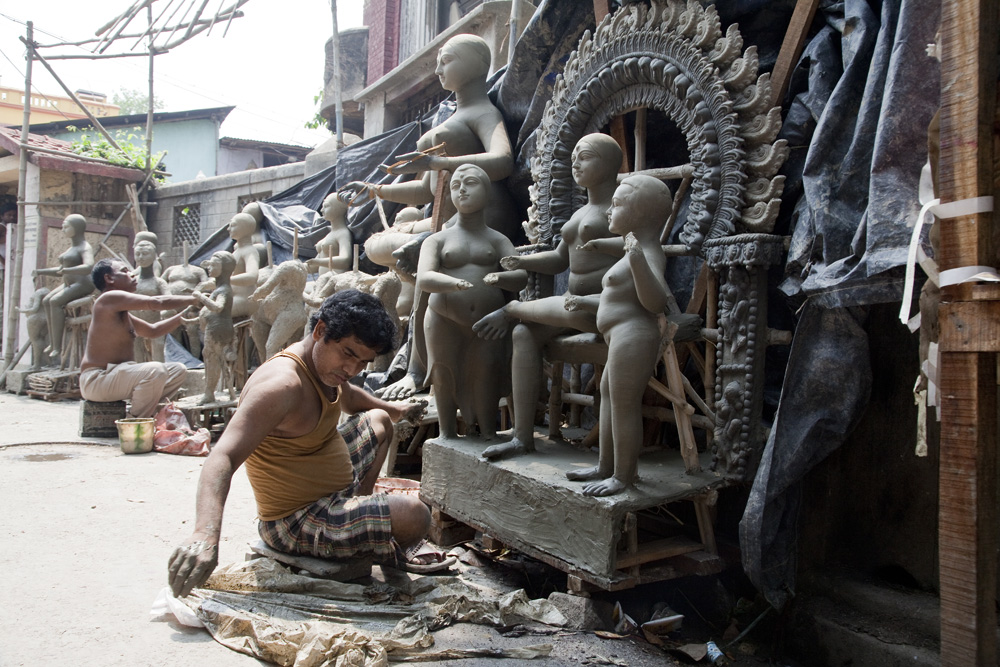 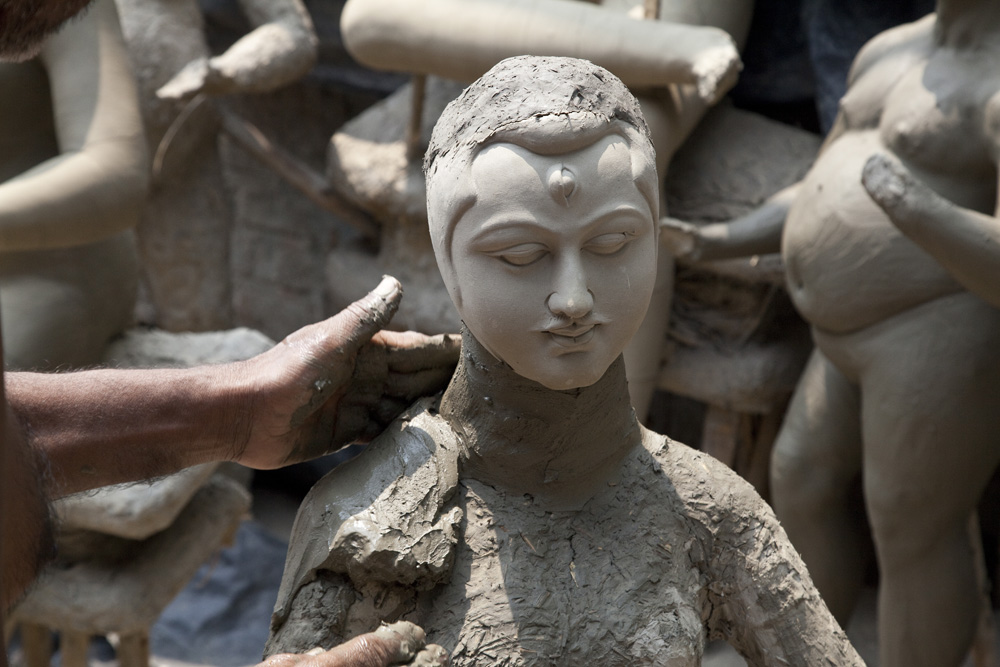 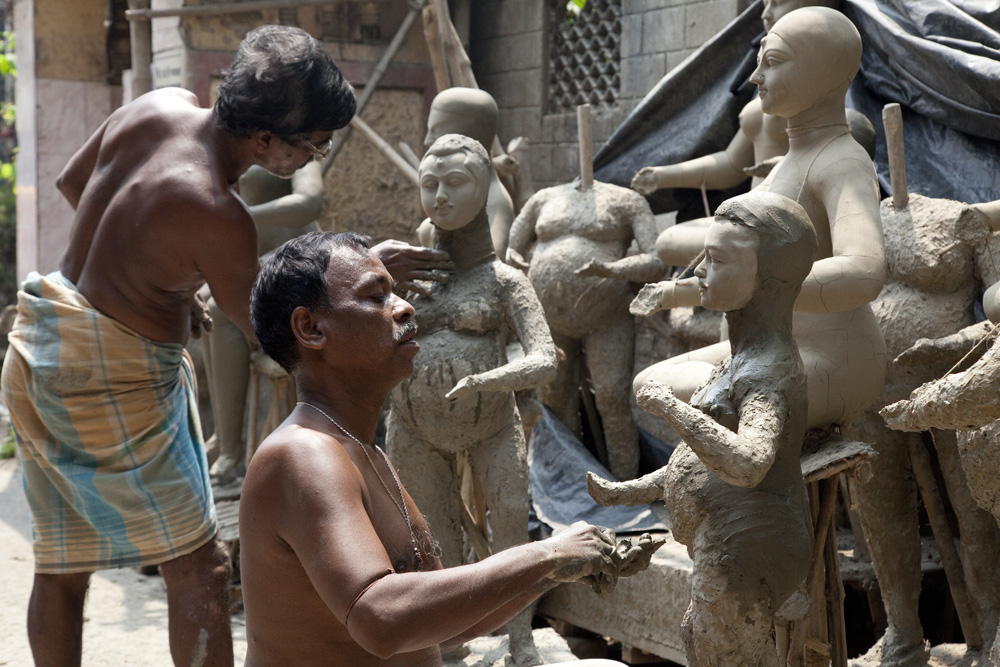 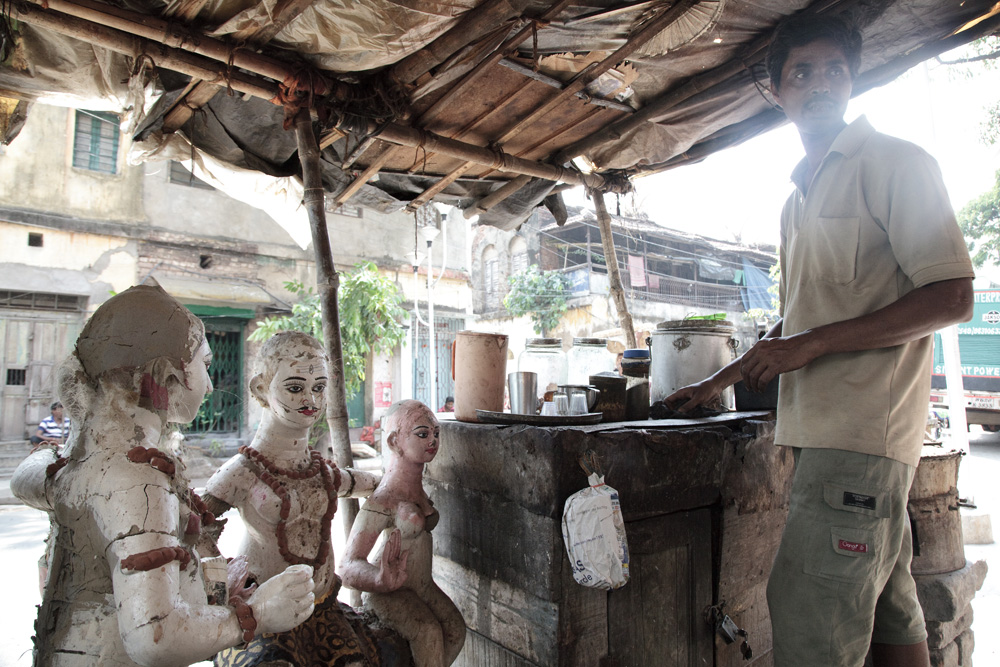 Finding the Kumartuli was not a difficult task, as I headed North of the Howrah bridge I began to see more and more of these strange blank figures drying in the sun. At first their appearance was a bit unsettling especially as the hands and faces seem to be made independently (more labour intensive I would guess). It was slightly frustrating as I found very few which where painted, in their blank state they were not as photogenic as the finished item.

Another issue was the light and heat. By this time it was getting hot in Calcutta, I mean really hot. Walking round in the midday heat was getting such a task that I even bought a hat to keep the sun off my head (this didn’t really help either as my head completely overheated and the sweat was pouring down my face and getting in my eyes).
To give you an idea of just how hot we’re talking about here are a few things I’ve heard from locals about Calcutta in the summer time: During the summer you’ll find many motorbikes fallen over where they’ve been parked, the reason being that the kick stand has literally sunk into the molten tarmac. Apparently there comes a point where your skin fails to function due to the heat and will begin to fall off (nice) and my personal favourite, if your head goes above 42 degrees you will simply fall down dead.
Aside from dealing with these immediate difficulties the camera was really struggling with the harsh light. Basically by 11a.m it would be about 34 degrees and the light was terrible so what I really was looking for was getting inside one of these cool, softly lit workshops. 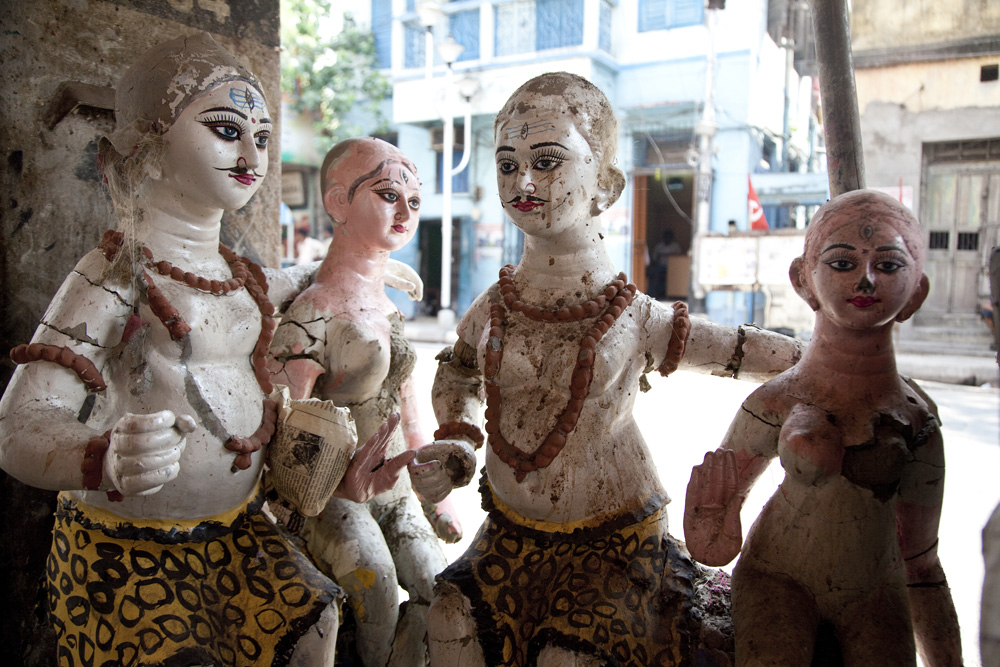 The narrow streets of the area provided some refuge from the light and heat and I was able to get few shots of the idols in the various stages of production. It seemed to be a large industry and I’d heard that they were beginning to export more and more of them. 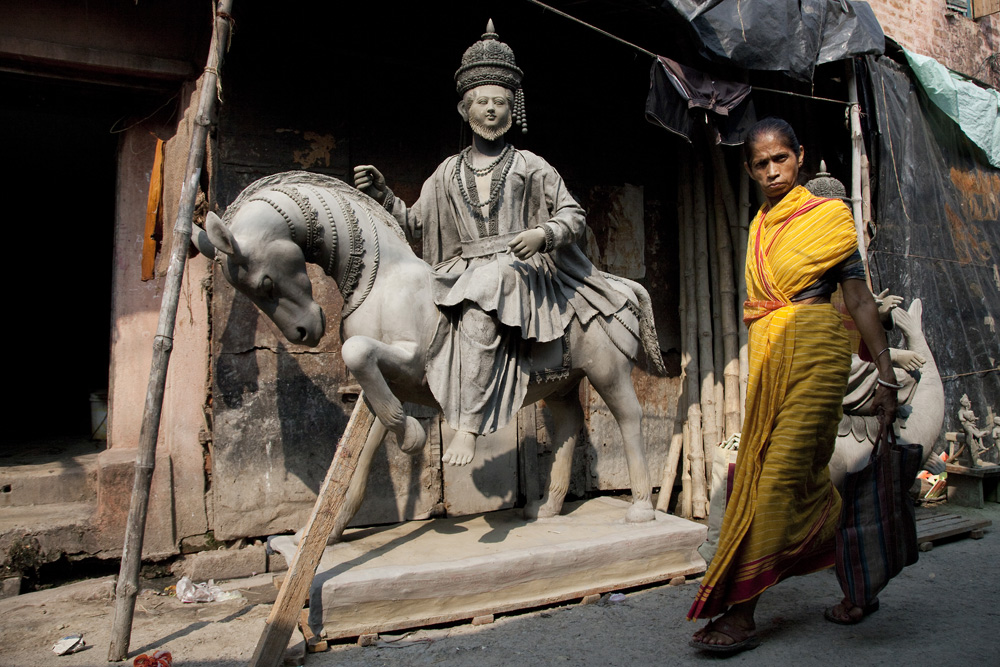 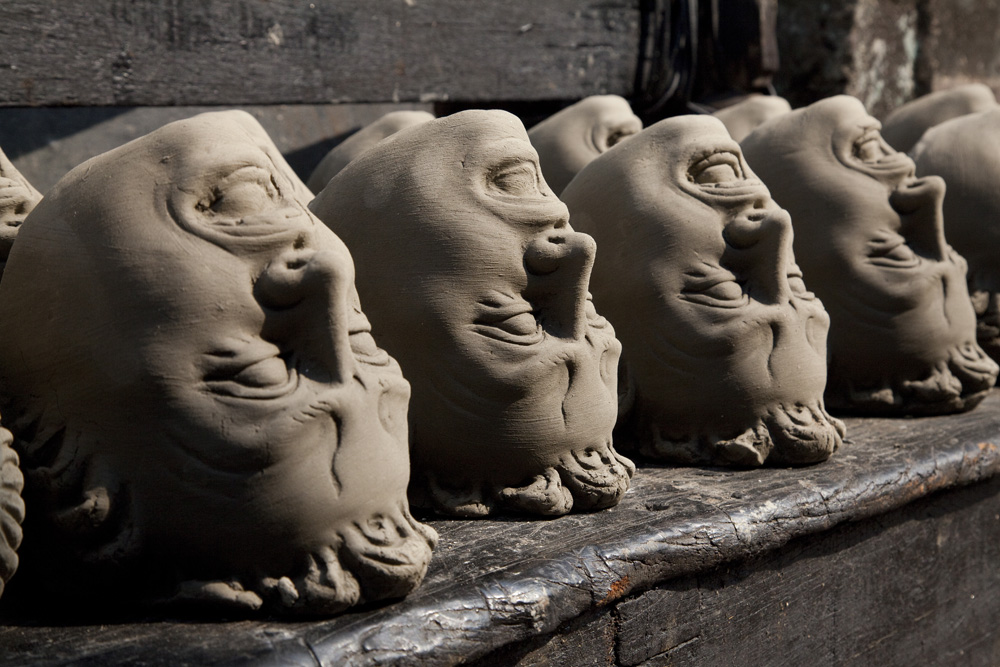 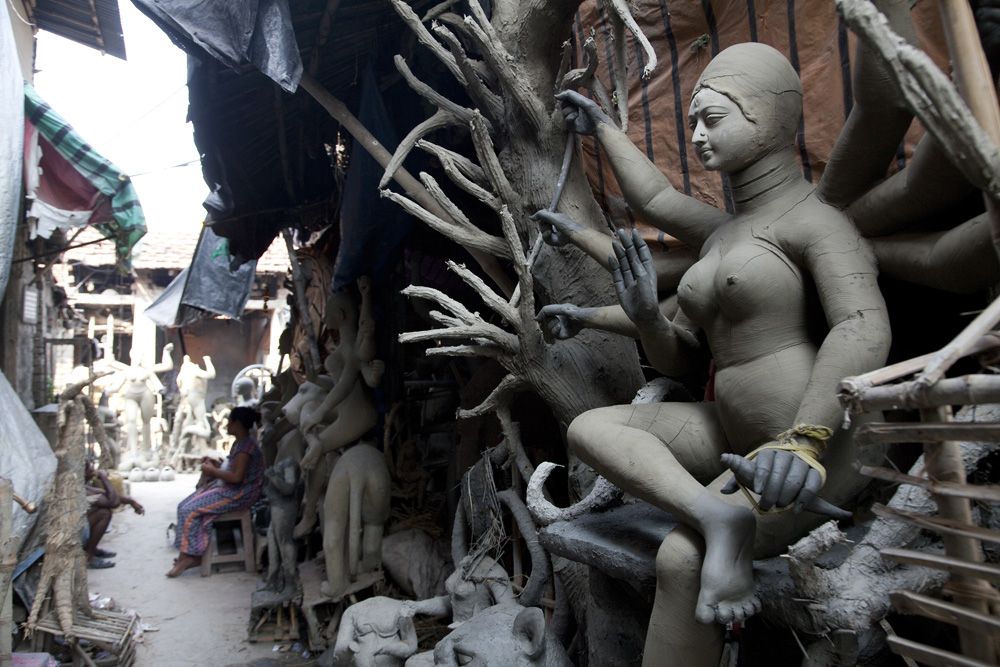 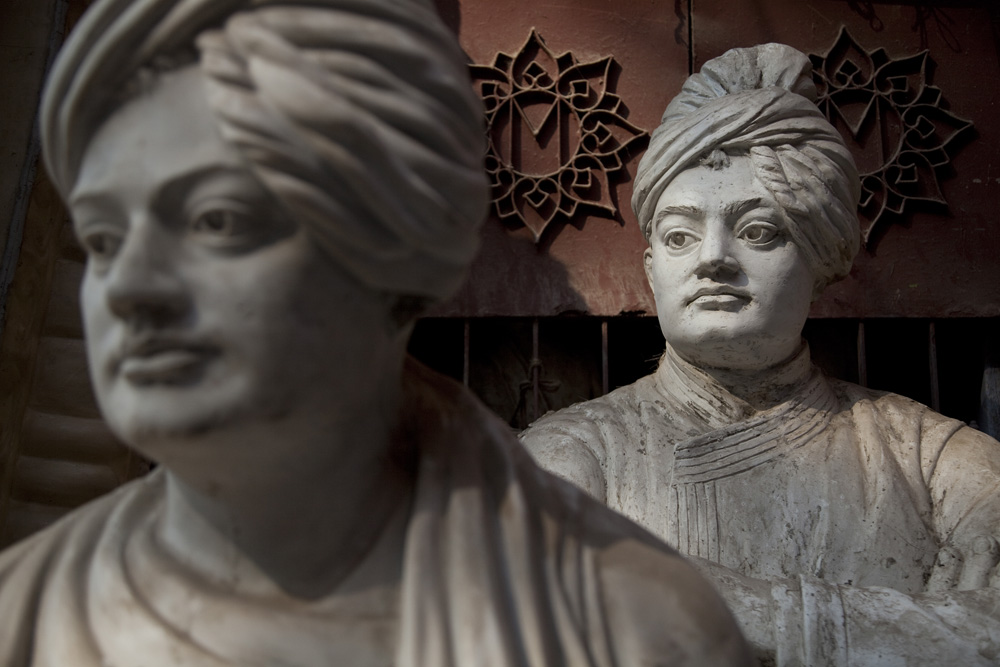 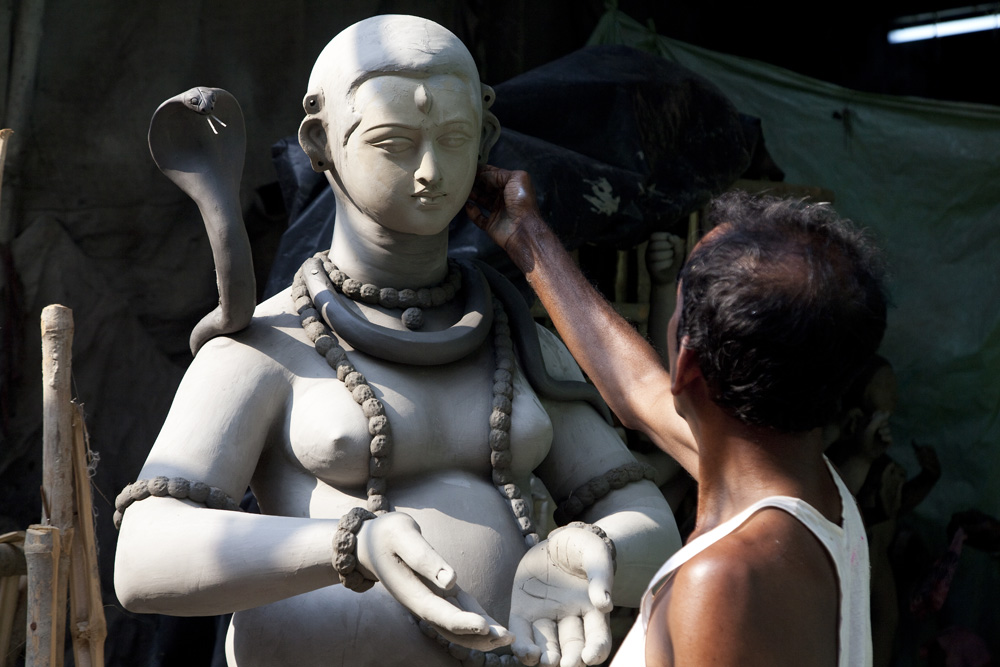 After chatting to a few of the different sculptors I was finally given the nod to go inside and take some pictures, the light was nice and soft and I was finally able to get some images I was happy with. The two below and the one at the top of the post are from inside this workshop and it made a huge difference to get out of the midday sun.
Of course after I’d been in there for a while they began mumbling about Rupees so I pulled a 100Rs note for them (enough for a round of chai’s or more likely a cheap bottle of Scotch).
I normally don’t like to give money for the opportunity to shoot as I feel I’m funding a much bigger moral issue but in this instance with the less than ideal shooting conditions I was happy with the trade off. After a while they started making ‘Okay? Finished now?’ noises but I reminded them that they were the ones that had rolled these dice and I wasn’t moving until I’d got what I’d came for, firm but fair. 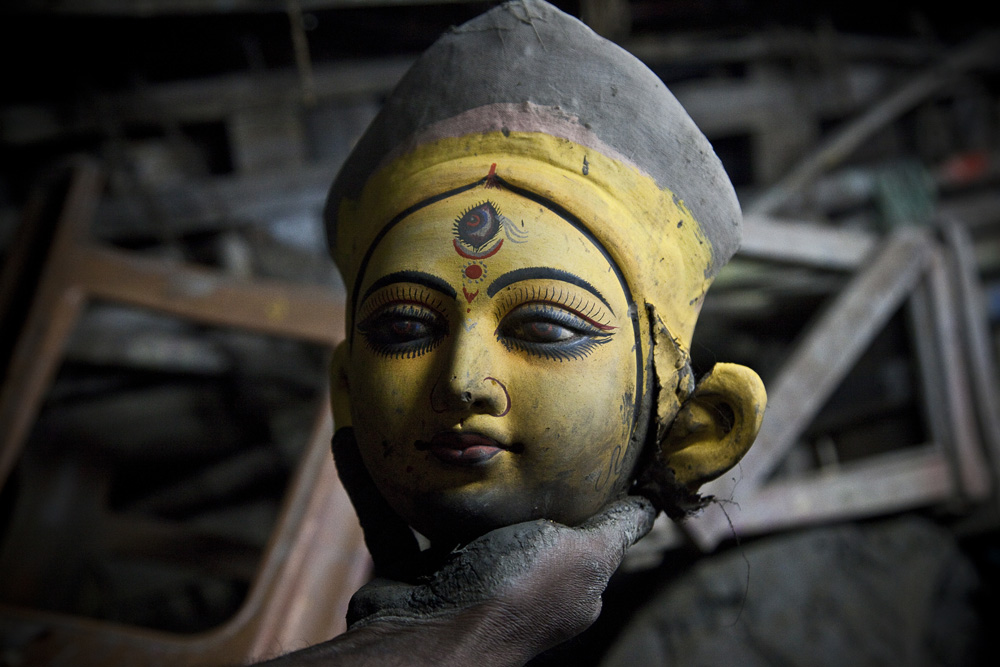 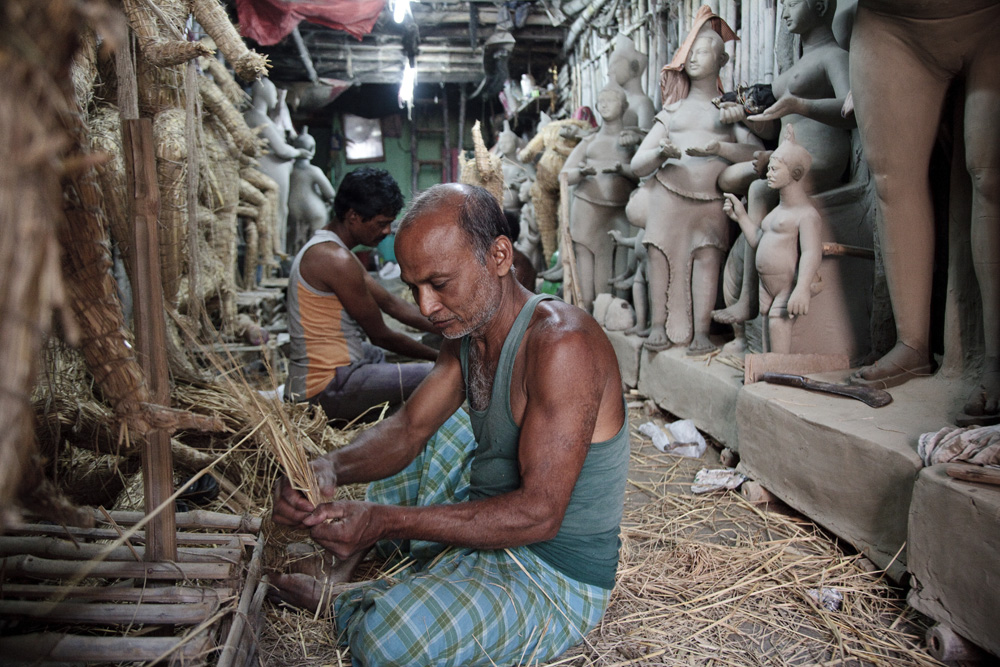 While walking round the surrounding areas I came across a few of the idols in their finished state, after seeing all the labour that went into creating them it was hard to believe that they would be pushed out into the river – but then again I guess that was the whole point and in many ways made perfect sense. 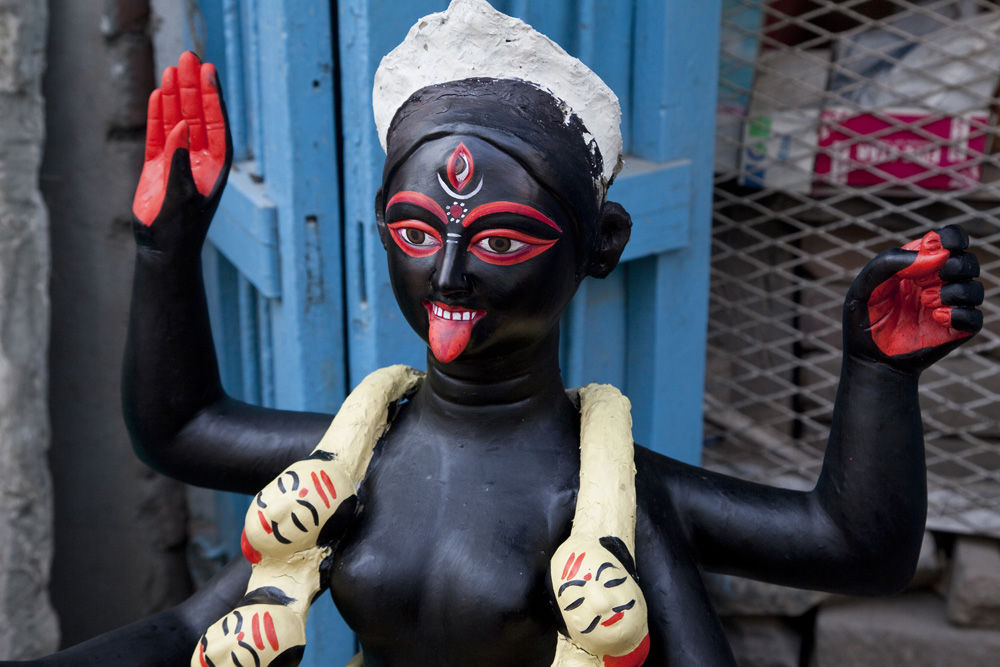 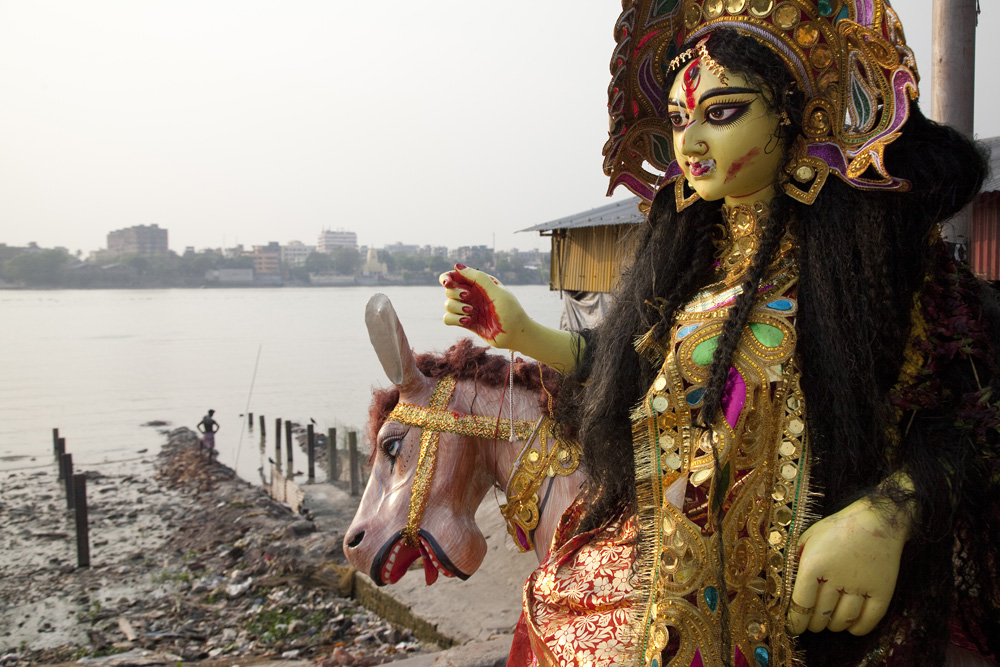 As for my accommodation in Calcutta I’d decided to go a bit high end (relatively speaking). Upon arriving in the city after a delayed all day train journey I’d arrived late in the evening and went straight to the popular Sudder Street area to find a hotel. Sudder Street is great for meeting other travellers but as I found out not great for accommodation – expect basic.
Long story short the following morning I checked out and found this des res in a hotel round the corner. It did the job nicely and while at 1,600Rs (€19) a night and easily the most expensive place I’d stayed in it was still a bargain in the grand scheme of things. 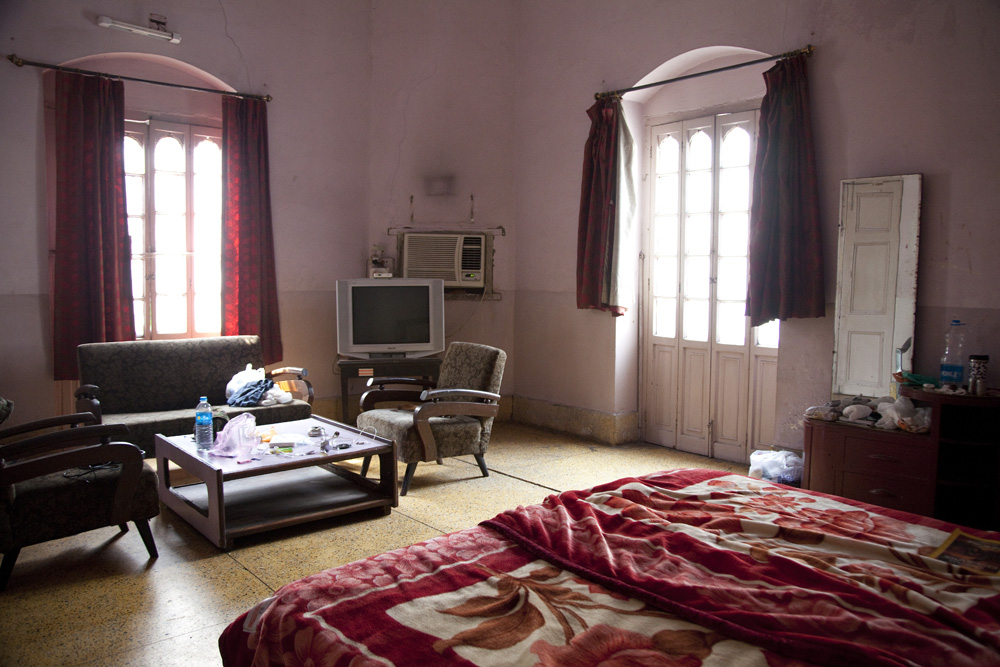 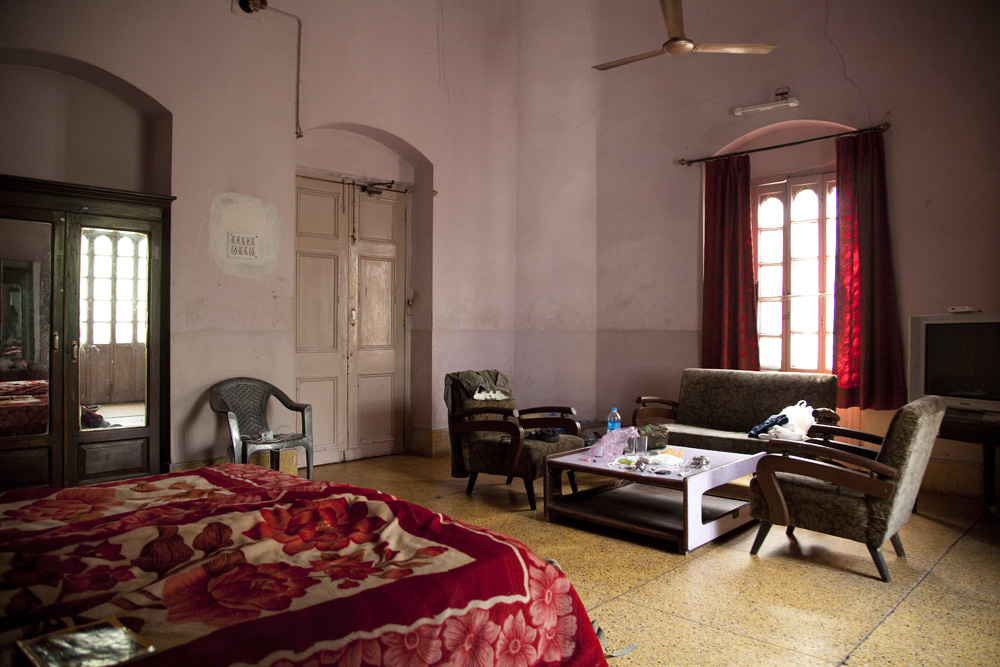 Worth the admission fee alone was this air conditioning unit pumping out a steady flow of 22 degree bliss. 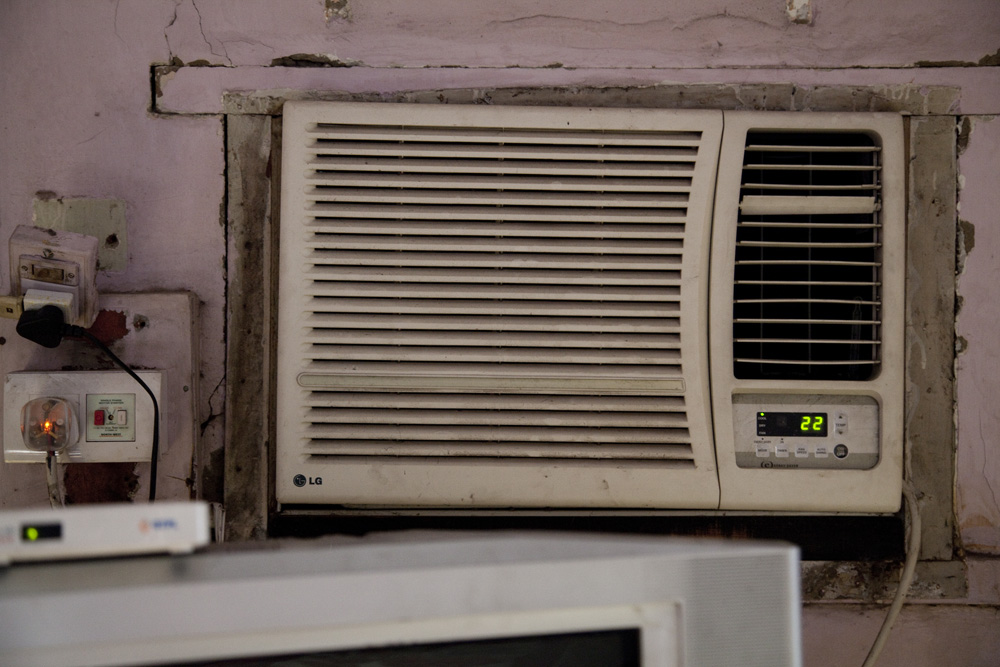 Here are a last few images from around the city, I found out that Calcutta is still largely Communist hence all the murals and the Ambassador taxis (the reason being that foreign imports were banned right up until recently – similar to the Eastern bloc and the Trabant). Last picture shows the most comfortable train in all India, great views and lots of leg room…. 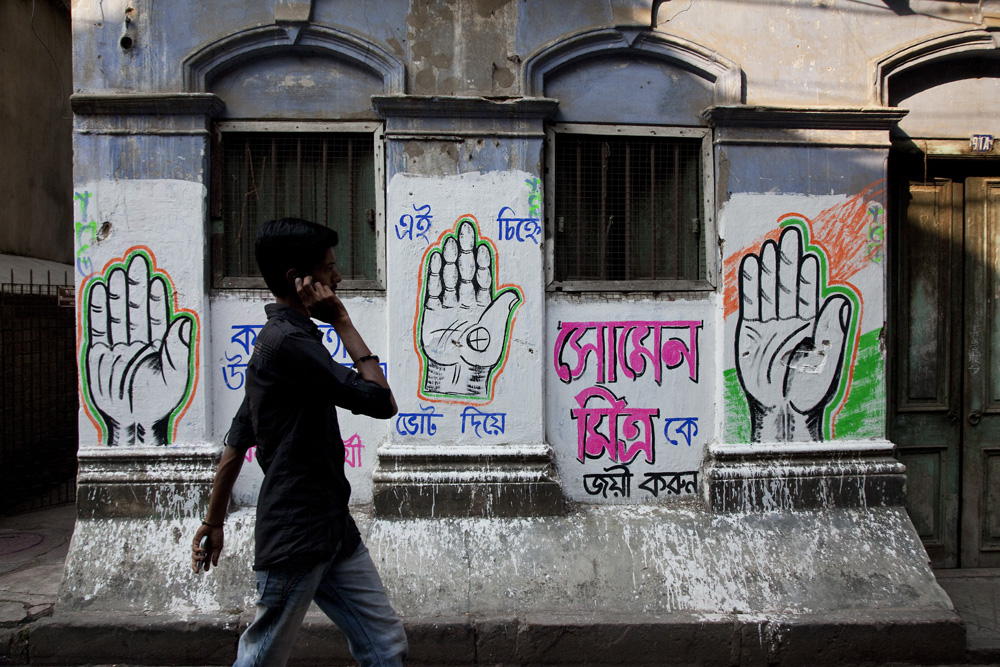 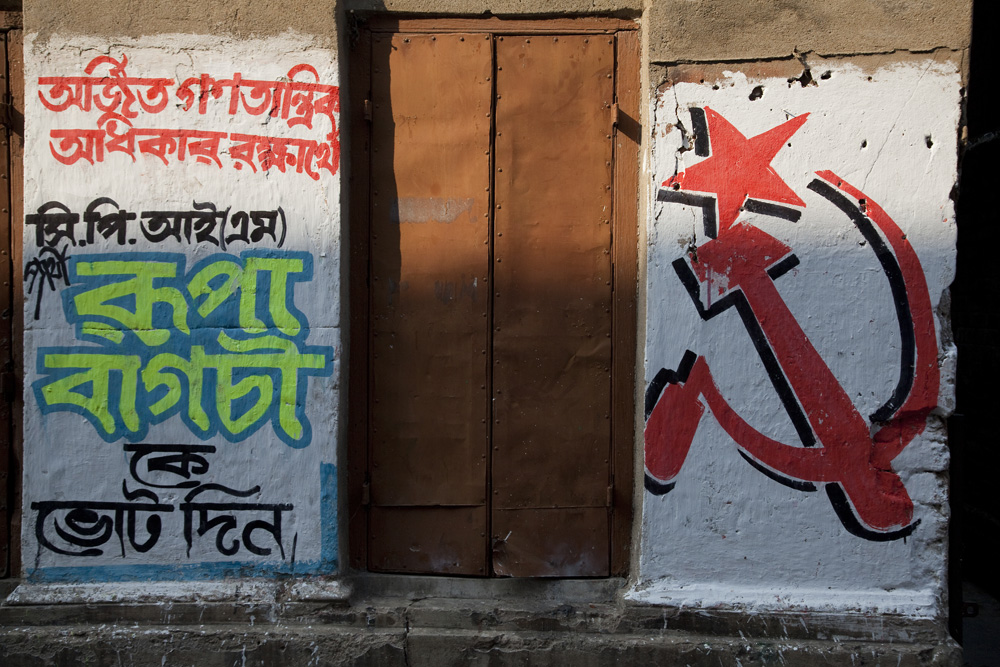 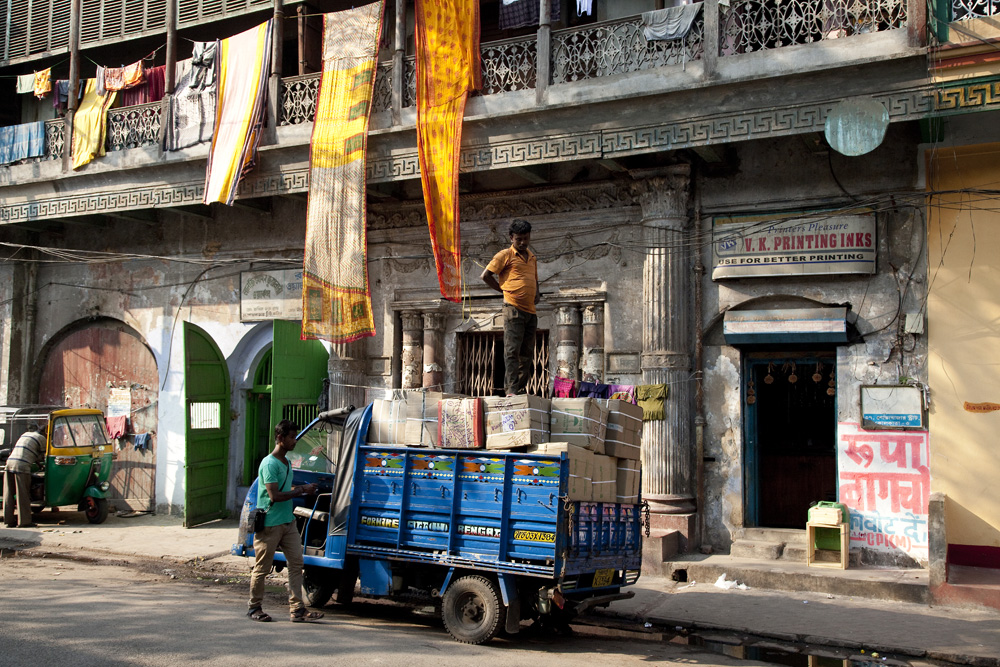 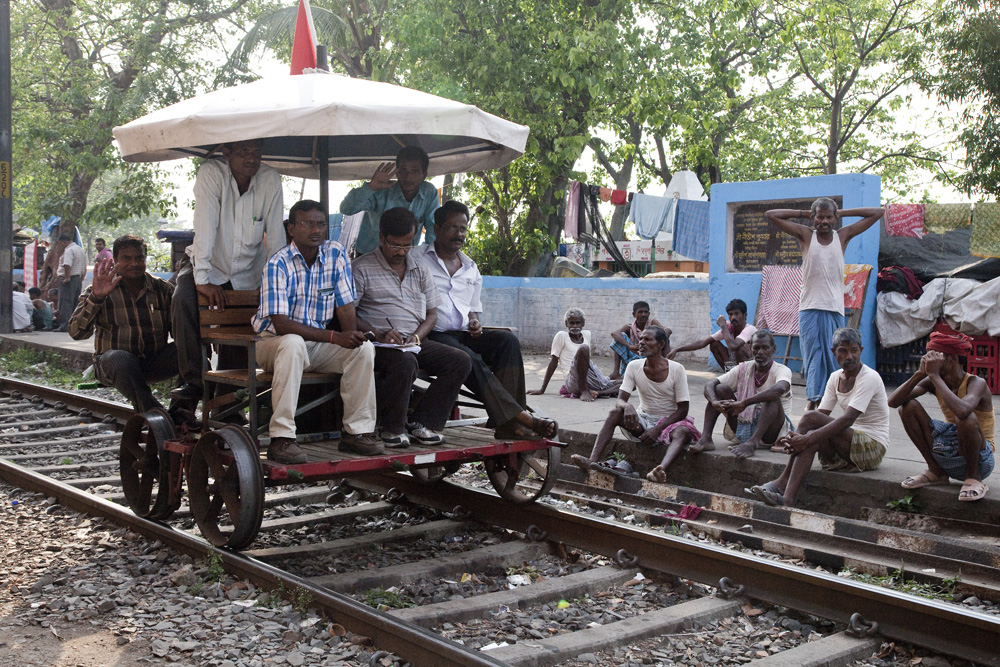